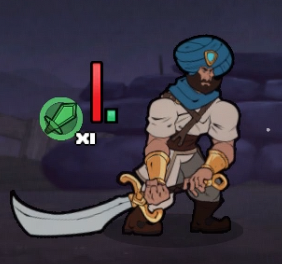 Zakwas is a bodyguard and the fourth unlocked character.

Zakwas comes from an eastern faraway land where he was trained to act as a bodyguard for the emperor. Unfortunately the emperor was assasinated on his watch, this forced Zakwas to flee the loyal court and his homeland. Luckily Zakwas soon encountered the Epic Band of Heroes, promises of adventure, companionship, wealth and safety allured Zakwas to join the hero company. Zakwas is sure that THEY are coming. He has no idea who “they” exactly are and why would they attack, but no one can blame him for not being ready. He is always worried about the safety of the group and can sometimes be a little fidgety.