Favian is a bard and the first unlocked character.

Favian used to teach at the academy, he was the youngest member of the teaching staff an the students were quite fond of him. But Favian was young and curious so the halls of ivy were not enough for him. He wanted to see the wonders of the world, hear all the untold stories and sing with the sirens. During his travels Favian joined forces with the Epic Band of Heroes many times, growing attached to the merry band. Favian always returned for the academy, but as there was always just one more adventure to undertake he never stayed for long. Unlike the other members of the Has-Been Heroes crew, bookwormish and sophisticated Favian is not exactly a battle hardened adventurer, but he takes his responsibilities seriously. He takes pride in his profession and considers it his duty to boost the group morale with constant singing, lute playing and poetry. 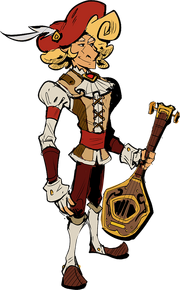